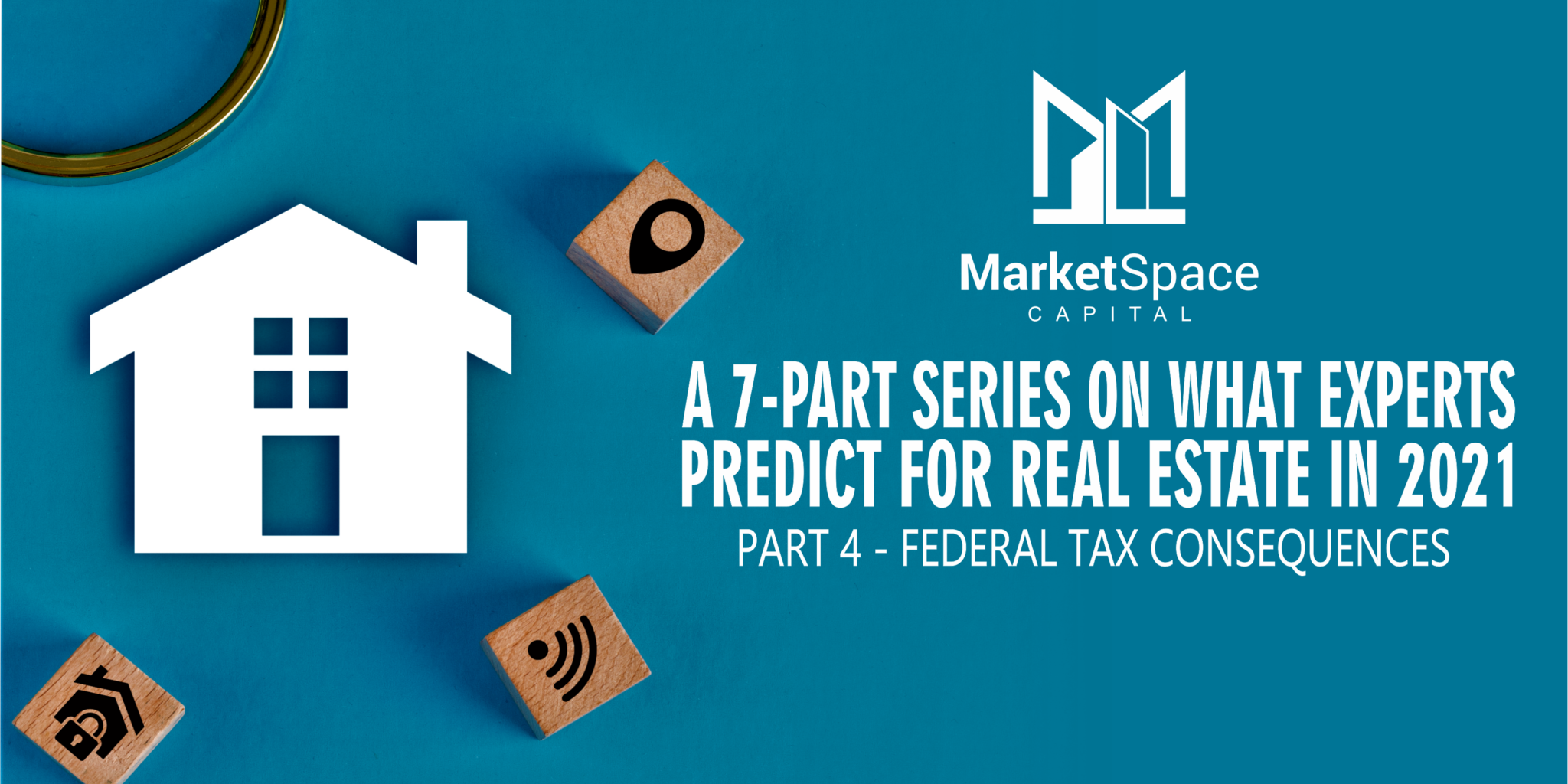 To understand what the real estate industry experts crystal ball for 2021 may predict, a strategy discussion was held with some of the most experienced and knowledgeable real estate experts. The cerebral panel covered topics such as capital markets, the economy, construction costs, development trends, effects of COVID, regulatory matters, and much more.

This article is the 4th in a series of 7, broken into bite-size topics, related to the all-important question of given the current landscape and forecasted trends related to the economic, political, banking, healthcare, and real estate sectors, many real estate investor are asking the question should they be leaning into these headwinds, or should they be retreating to the sidelines. 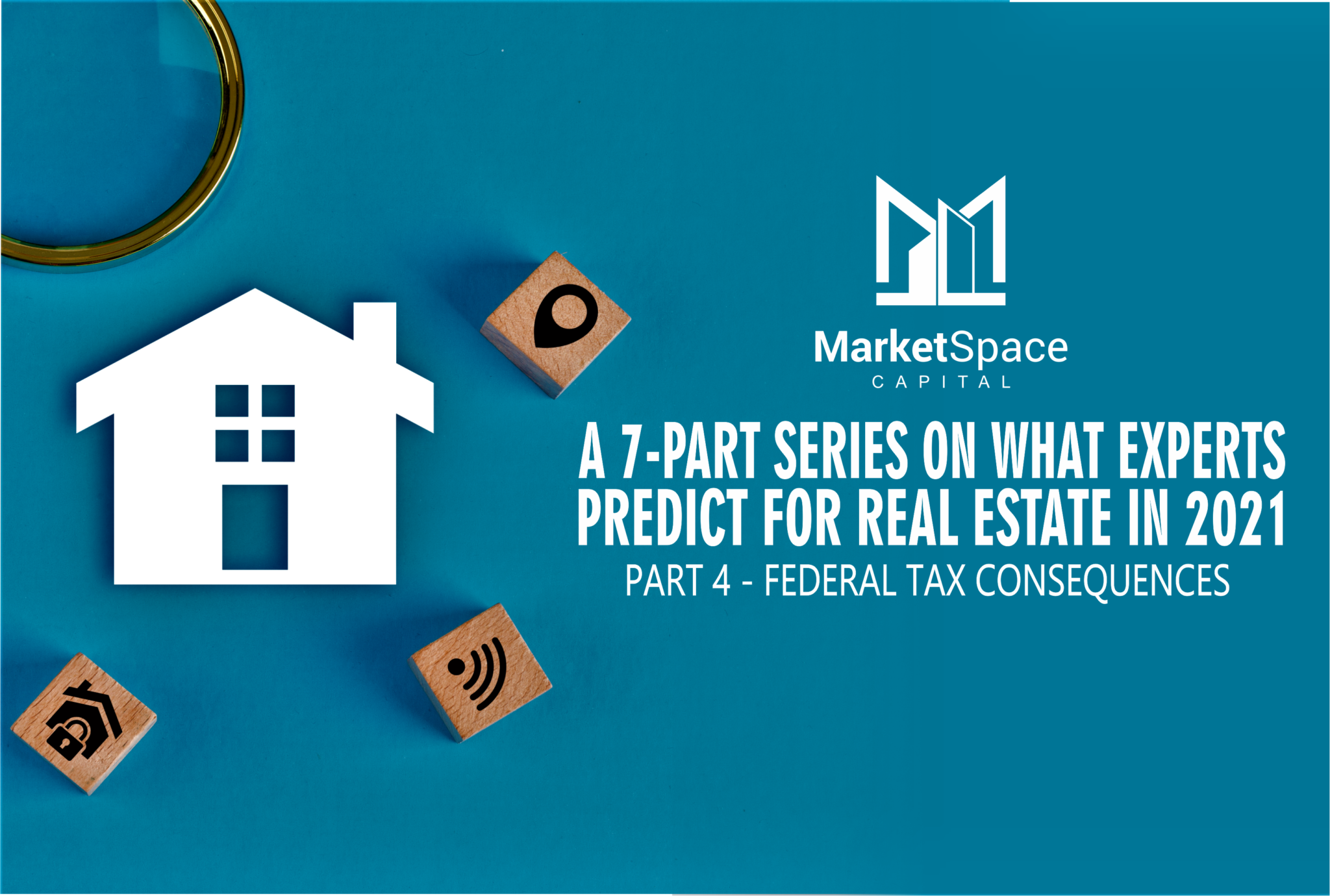 Part 1 of the Series suggests that now is the time to be bullish on real estate investing. But what are the fundamentals driving that conclusion? Keep reading the entire series to uncover these fundamentals.

Tax consequences of the election results remain unclear. The runoff election on January 5th in Georgia will determine who controls the Senate. If the Republicans maintain control, a balance of power will remain in place, and many of Biden’s proposals would be more difficult to pass as currently drafted. However, if it flips to Democrats, there will be a negative impact on capital gains, Opportunity Zones, 1031 Exchanges, etc. That said, Republicans will probably retain the Senate and uphold current policies, which favor Commercial Real Estate.

Historically it takes at least twelve to twenty-four months for a new administration to have major legislation passed, therefore regardless of whether Republicans or Democrats control the Senate, it is believed that there will not be much change for the real estate investor in 2021 due to changes in tax regulations.

Many of the proposals in Biden’s plan target taxpayers earning more than $400k in annual income. Such areas which have been targeted include the elimination of like-kind exchanges, exemption from passive loss rules, and accelerated depreciation. Nevertheless, the following are some of the more notable areas of the tax code which will be most affected by the Biden-articulated policy positions:

The 1031 Exchange program allows investors to delay paying tax on Capital Gains on CRE by Reinvesting the Profits into another Real Estate Asset. Biden’s plan would limit the tax advantages in 1031 exchanges to those making $400,000 or less. This will not only impact taxpayers that make over $400,000, as the ripple effect is that there will be less 1031 Exchange activity which could cause a decrease in demand. This reduced transactional impact in the 1031 Exchange marketplace could affect overall pricing, and this impacts all parties, regardless of their income levels.

Opportunity zones are in 8,700 locations across the U.S. The program allows investors to channel capital gains generated from the sale of assets into qualified funds that make long-term investments in these underserved communities. Taxes on some or all the capital gains that would have otherwise been paid if the funds weren’t invested in an Opportunity Zone, is deferred, with the amount of such deferral being dependent on how long the investment is held.

Some of the Biden-proposed reforms are aimed at ensuring the Opportunity Zone areas are truly in need, and that the deferred capital gains dollars are being used to create jobs and affordable housing. Biden’s “Build Back Better” platform calls for reform of opportunity zone funds to ensure they serve black and brown communities, small businesses, and homeowners.

Opportunity zones will likely require greater measurability of impact and additional criteria on the zones. It appears that although there will be some reporting and regulatory restrictions added during the Biden administration, opportunity zones and most of their benefits appear to remain in place. The likely result is that like-kind exchanges are at risk and capital gains tax increases will be under pressure. Opportunity zones could see more interest to delay and reduce payment of capital gains taxes.

The current highest Marginal Tax Rates under the tax code remains at 37%. Biden has indicated that his administration will reverse the Trump and Jobs Act tax cuts for the wealthy, by restoring the 39.6% top marginal tax rate, up from the 37%.

Biden’s plan would first raise taxes on capital gains by treating them as ordinary income for those earning more than $1 million. This would dramatically change the long-term capital gains tax rate for these individuals from 20% to a maximum of 43.4%. In practice, this means that proposals to significantly raise capital gains tax rates, with no other changes, will lose federal revenues. Using research data from the Congressional Budget Office on capital gains realizations and these elasticities, it is estimated that raising the top rate to 43.4 percent (39.6 percent statutory rate plus the 3.8 percent Net Investment Income Tax) could lose about $2 billion each year in federal revenues.

However, Biden is not simply proposing to raise the top rate on capital gains. He also proposes eliminating the current regulations related to the step-up basis in capital gains. According to the Joint Committee of Taxation, not taxing gains at death results in a loss of about $40 billion each year in federal revenues. This change could temporarily increase investment sales activity for 2021 in preparation for the change in 2022.