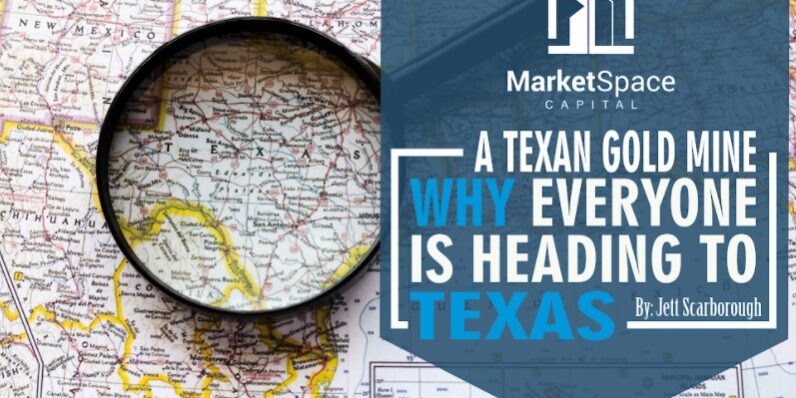 A texan gold mine
Why everyone is heading to Texas

Are you looking for gold, friend? Well, come to Texas and look around. A new gold rush is occurring deep in the heart of Texas. Whether it is the “new gold” in oil shale reserves, new technologies, Bitcoin, or many other industrial advancements, or simply the search for a lower cost of living, no state income tax, less regulations, tort reform and reasonable property values, there is gold in them there hills. And this modern-day Gold Rush is causing most real estate investors to smile from ear to ear and generate very attractive investment returns.

With a population of 29.9 million, the population density in Texas is 108 people for every square mile, which puts the state at the mid-range for density rankings. Median household income for Texans is $57,000, which is also a mid-range value according to national data from the U.S. Census Bureau. So, if Texas is in the mid-range on these benchmarks, then why does everyone want to come to the Lone Star State? 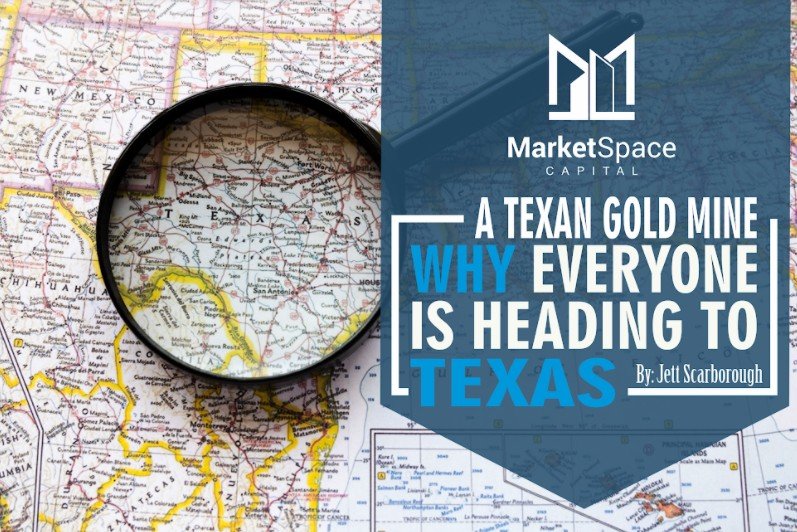 The Texas economy is valued at $1.6 trillion, which places it at a close second to California. Annual job growth was measured at 2.2 percent as of 2017, spurred, in part, by lower business costs and less regulations. The state has earned the following accolades from Forbes Magazine:

Texas, as we all know, is big. After all, “everything is bigger in Texas”. But in terms of population, Texas is only getting bigger. The state has the second highest population at 29.9 million people, as of 2020, and has a high growth rate to match. Texas is growing at a rate of 1,000 people per day and has many of the fastest growing cities in the nation. In fact, five of the top 10 fastest growing large cities in the United States are in Texas: San Antonio, Dallas, Fort Worth, Frisco, and Austin. When you expand the survey, this Texas growth trend continues, as out of the 15 fastest growing American cities, by percentage, Texas houses 7, including New Braunfels, Frisco, McKinney, Georgetown, Rowlett, Midland and Round Rock.

What does this mean? As George Strait put it “it means that Texas is the place I’d really love to be”. It is the land of opportunities. It is “wide open for business”. And many people are flocking to Texas in search of new careers, greater value in real estate and lower cost of living. And it bears repeating, “No state income tax”! When you follow the money, the prudent people and their money are all flocking to Texas.

Relatively speaking, the job market in Texas is strong, and its only getting better. Since many corporate headquarters are relocating to the Lone Star State, it means that there is a tremendous demand for qualified workers in many fields. On top of that, residential housing costs are relatively low. Whether you are in the C-suite, or hold a middle market job, when you look at the house that you get for the relative dollar in terms of salary, many areas in Texas offer a great value for growing families.

Along with the low housing cost, Texas has a reputation for low taxes. The state has no state income tax, and according to the fiscally conservative policy makers in Austin, they never will. In fact, a state income tax is against the Texas state constitution. Some say that the state’s revenues must therefore be generated by larger than average property taxes. But, in reality, these property taxes are about half of what you would pay in a city like Chicago. As the state is known for its libertarianism, taxes are a sort of “state sin”.

Alternatively, a state like California has no problem taxing people, especially small business owners, to death. For those businesses that are still alive, they are looking for greener pastures. Greener pastures that all exist in the great state of Texas, This, along with other factors, encouraged 86,164 California residents to move to Texas in 2018 alone, which is the largest crowd, by far, from one state to another. This trend continues in 2019 and throughout 2020. People from states like California, Illinois and New York are moving to Texas by the tens of thousands each year, in search of a better life, and better economic prosperity, than anywhere else in the country.

People from states like California, Illinois and New York are moving to Texas.

Contrary to popular belief, Texas is more than just cowboys, ranching, rodeos and oil. Texas is the energy capital of the world, has the largest medical center in the world, and is home to Space City Houston, which is the space exploration capital of the world. Texas makes up 9% of the United States economy. But if you look at Texas as its own country, it would have the tenth largest economy in the world, beating out countries such as Canada and South Korea.

As we all know, everything is bigger “and more economically diverse” in Texas. One of those “bigger things” is the Texan manufacturing industry. Back in 2017, total manufacturing output from the Lone Star State was $226.16 billion, or about 10 percent of total U.S. manufacturing goods, according to the Federal Reserve Bank of Dallas. The industry supports more than 1,241,379 jobs in Texas, or about 10.2 percent of its workforce. The average annual compensation for manufacturing was $82,544, which is one of the highest in the nation, and helps boost the state’s gross domestic product. Finally, at a time when global manufacturing expansion is slowing, this sector in Texas continues to grow at a healthy pace. Texas is also the king of American exports. In 2018, Texas exported a record $315.9 billion of “Made-in-America” goods to the world. Texas is the largest state exporter of goods. While their exports are led by crude oil, Texas has a diverse number of exports ranging from technology to rocket parts.

Furthermore, the Texas real estate market is strong. The housing economy remains rock-solid despite the shock and awe of the pandemic. A long period of record-low mortgage rates has opened the floodgates for a refinancing boom that is likely to last for several years. In addition, after a momentary COVID-19-induced blip, home buying demand has picked up, driven by low rates and enthusiastic millennial and investor buyers. Spurred by strong demand and record-low mortgage rates, expect to see more home building in 2021 and beyond, which should help support a healthy housing market for years to come.

Texas is also gold mine for Real Estate investment. The housing market has performed exceptionally well since the post-recession years. Home sales in the state have grown, and will continue to do so, at a good rate for years to come. While the market did see a small decline at the beginning of the pandemic, like almost every industry, it was hit much less severely than other states, and for the most part has already rebounded.

Population growth drives interest and profitability of real estate investing ventures. The housing sector and multifamily home development will continue to be under pressure due to high demand for residential units as this population grows.

Let’s take a look at some of the best markets in Texas.

This, along with a fast selling market, makes San Antonio another one of the great choices in Texas.

By no means is this a comprehensive list. Yet it should be viewed as more of a glimpse into the Texas submarkets. The markets listed are some of the best in the country, if not the world, but there is a plethora of other Texas markets to be discovered.

Like everything else in the world, Texas was hit by the corona virus. Texas may not be immune to a pandemic, but they are not far from it. First, to be clear, Covid-19 hit Texas hard, and in some ways, caused damage that will take substantial time to heal. But, in other ways, the Texan resilience, whether it be from Hurricane Harvey, which was the worst storm in the history of Houston, or the pandemic, Texans work together, rebuild and bounce back on their feet faster than anywhere else in the world.

The overall Texas real estate market experienced a noticeable dip at the beginning of the pandemic. As anyone would expect, a national shut down paired with an unknown pandemic, are not the best ingredients to promote a thriving economy. People were scared and locked inside. Throughout the country, recovery has been slow, and in some places, has not yet even begun as lock-downs continue. Texas, on the other hand, was one of the first states to begin to open. At first, many “nay-sayers” saw it as a bad move, as a spike in positive cases ensued. But soon, the spike flattened, positivity rates declined, and the state began to recover. Almost immediately, jobs returned, houses began to sell, and people began to rally together to help struggling businesses. The residential housing market is doing better than ever and has a trajectory to move in a positive direction for years to come.

The Land of Gold

Texas is a new land of opportunity. Life is good in Texas – and its only getting better.

Texas is a new land of opportunity. Life is good in Texas – and its only getting better. Thriving business, massive migration of capital and human resources, and a booming real estate market are strengthening the state’s foundation. Texas is the place to live, work, play, and invest. The “city of gold” has been a dream and a quest of explorers throughout history. From the early European explorers, to Indiana Jones, people have searched the new world and beyond, for this golden city. It just so happens that we have finally found it, and when you get there, you will be greeted with a friendly “Howdy”!

Fill out this form and book your appointment: